The two critical forces impacting much of what we experienced each day on our passage were weather and watches. Weather dictated our comfort, sailing direction and speed during each hour of our 4 day, 3 hour passage. We felt every change to the wind, waves, temperature and rain in an immediate and intimate way. And our daily existence was set to the rhythm of the clock, alarms going off every three to four hours signaling a watch change – time to wake up or go to sleep.

We left Hampton, VA at 3pm on Saturday, Nov 4 after Erin and I did a little dance marking the last time we’d touch US soil in a while. Our first half day was not ideal. It was cold and drizzling. The waves were fairly high at 6 – 8 feet and not running consistently with the wind. This caused Boundless to bounce around and feel a bit like we were in a washing machine. The winds were a little higher than ideal, at 20 – 25 kts. They were coming off our port bow, putting us on a close hauled point of sail where the boat is most heeled over. It was puke weather. And unfortunately, an inauspicious start since Andy was actually puking and Erin was close. Nothing like mac and cheese dinner on deck!

As the sun rose the first morning the weather gods were smiling on us. The winds began to moderate and the sun warmed the air a little. We traded ski hats for baseball caps and removed our thickest layer. The waves were still running a little high and were quite choppy in the Gulf Stream. But the kids were starting to feel a little better and Doug and I were getting our sea legs. Things were looking up.

But it would take another day or so for our bodies to adjust to watches. Someone is always on watch on Boundless, meaning someone is always awake and actively checking our position, sails, environment, etc. We run watches in two teams, each with one adult and one teen. For this trip, it was me and Erin on one team and Doug and Andy on the other.

We follow a 2 day schedule, with watches every 4 hours during the day and every 3 hours at night. Each team has a harder day with the 8pm – 11pm and 2am – 5am shifts and an easier day with the 11pm – 2am shift and the much easier sunrise shift from 5am – 8am. But regardless of the day and how much rest we each got on the off shift, when the alarm went off 15 minutes before the next watch, it was time to drag ourselves out of bed and be on deck before the next watch starts. Often the only motivation to get up was knowing that if you’re not there, you’re letting down the other team and your watch-mate.

For the first few days, we spent most of our time in bed when we weren’t on watch, either sleeping or trying to sleep. Although sleep was sometimes difficult since we were heeled over and getting bounced around by the waves. Bodies aren’t used to sleeping in 2.5 – 3.5 hour increments and it takes time to get used to. But by day 3, Doug and I were mostly awake during daylight hours and the kids were awake for at least a few hours each day when not on watch.

Erin and I found staying awake on our night shifts challenging. It often took all our effort to not fall asleep. We got into a stay-awake routine of rounds of calisthenics and singing at the top of our lungs – rock, pop, musicals and on one strange morning, songs from the kid’s favorite album when they were little.

By the second morning, the weather turned beautiful and stayed that way for the rest of the trip. The temperature was in the mid 70’s and the winds were an ideal 10 – 20 knots, coming from about 90 degrees off our bow. This allowed us to sail on a beam reach, a fast point of sail with less heel of the boat and less rolling around from waves. Absolutely beautiful!

Rain cells rolled by from time to time, mostly at night. But we were able to see them in the distance on radar. It was regular sport to spot them on radar, track their location, direction and speed, then alter Boundless’s course to go around them. It was a real-life video game!

Given the beautiful weather, when we weren’t fighting sleep, watches were idyllic. With the exception of the first and last few hours of the trip when we were close to land, there was nothing to see but water, sky and the occasional pod of dophins. We followed our watch routine. Every 15 minutes we scanned the horizon for anything (we never saw anything), and checked the chartplotter for AIS targets (Automatic Identification System, a system that displays information about boats nearby) and radar targets. The scan takes a couple of minutes, then it’s back to chilling out.

One diversion was dropping a fishing line in the water. Unlike normal fishing, we don’t use a rod or reel. We just have a big coil of very thick fishing line with a hook and lure at the end. We throw the hook and lure overboard and let out 50 – 100 feet of line. We tie the rest of the reel to the rail so that it won’t spin and hook the line through a bungee cord so we can see if it gets tight. Then we go back about our business. I did this one afternoon when I was on watch and about 15 minutes later the bungee was taught and clacking against the rail. I caught a fish! I pulled in the line hand over hand and flopped him on deck – a Mahi about 2.5 feet long. That was at about 10am and by noon we were sitting down to grilled Mahi for lunch. Now that’s fresh fish!

Other than fish and rain cells, our other excitement was periodically seeing a far off AIS target on the chartplotter. We’d look up the size and destination of the ship, then check if we would get close enough to see it on the horizon. We saw 3 or 4 far-off ships on AIS during the trip, and saw two of them with our eyes, the closest was about 5 miles away.

I also spent hours gazing out at the sea. There’s something indescribably calming about staring out into the endless sea, nothing but wind and rhythmic waves in all directions. Offshore passages can be tough given weather and watch schedules. But for me, this peaceful time, when my mind goes quiet and somehow melds with the motion of the wind and waves, is something I love and one of the joys of being offshore.

By the afternoon of day 4, Bermuda appeared in the distance. All four of us stayed awake for the next few hours as the islands got closer. We entered the Town Cut Channel leading into St George’s Harbor at sunset. We tied up to the customs and immigration dock at 6pm and were safely at anchor by 6:45. We had a quick rice and beans dinner then slept hard until late the next morning. We made it.

Want to see more of the trip? Check out the slideshow below. 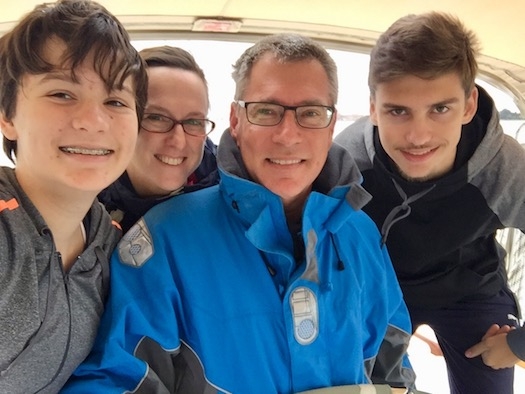 All smiles as we leave Hampton

10 Replies to “Offshore Passage to Bermuda”